I cheerfully met our new resident, Maria. She was accompanied by her daughter and son and was noticeably defying this change in her environment. She folded her arms across her chest and gave me eye contact.

Maria had a stroke that affected her speaking skills (known as aphasia). I asked her simple questions. When she chose to look at me and speak, her answers were syllables that made no sense at all. Her communication was completely garbled. I could tell by her facial expressions that Maria wanted desperately to communicate with me but felt neither safe nor adequate in expressing her feelings. She would not hold eye contact with me for more than a few seconds.

As the days and weeks went on, I continued to greet her in the hallway and affirm her presence at the dining table. She resisted invitations to organized functions or prolonged conversations. As the weeks turned into months, I sensed that Maria was letting me into her world, bit-by-bit, inch-by-inch.

One day she rolled her wheelchair into my office and in her broken communication, she asked to speak to me. I was able kneel down to connect with her eye-to-eye.

Her fingers crossed simulating cutting paper and I deciphered that she wanted her own scissors to cut out coupons in the newspaper.

I had immense, pleasure in giving Maria a pair of $1 safety scissors. When I handed it to her, her eyes brightened and she reached to hug me. She promptly put the scissors inside of her ever-present hip bag. I rejoiced with her as she hugged me several times, thanking me profusely and repeatedly in her garbled verbiage.

After that moment of scissor-and-hug exchange, Maria greeted me in the hallways with great expression. I learned to decipher her words and get to the core of her concerns. With each conversation, she hugged me and one day I heard, “I love you.”

Preciously, she cut a square from the comics, twisted it around a piece of candy and tied it with a ribbon. She presented it to me with the flair of a florist delivering a bouquet of roses. I was moved to tears by the gestures but more important, I was happy that after nearly six months, she began to trust me and let down her guard.

One day in particular, her hug ministered to me in a grandmotherly manner.  As she released my neck, I said, “Thank you, Maria. Please pray for me today.”  She nodded in complete confidence, tapped my hand and clearly stated, “I will.”  Another time, she wrote me a letter on a paper napkin. It contained a lot of letters put into words that made no sense, except to her and me, signed “Maria.” I have re-read this note many times and have tucked it away with my valuables.

Building trust with Maria took longer than it does with most residents. She taught me that no one is entitled to instant trust and confidence. It is earned slowly and respectfully.

Teri Weiman, SSD-AD, is a social services designee and activity directory in a central California skilled nursing facility. She oversees 80+ volunteers, supervises 11 activity aides and has two amazing assistants. She has learned that all long-term care residents have valuable attributes and can teach a lot about life … which she will share here. An early riser and eternal optimist, she lives by the saying Carpe Diem. 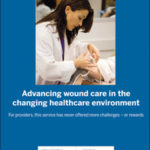