When Tracey Moorhead came of age, she had a goal: become a U.S. diplomat in the Foreign Service, specializing in Russia.

But when she graduated from George Washington University in 1989, the downfall of the Soviet Union meant she had to pick a new career path.

“I realized the foreign service was not going to be in my future,” she says. Fortuitously, a job at a law firm led to her becoming a legislative assistant.

“Suddenly, I was chasing down bills and sitting outside hearing rooms, and really learning how Congress worked,” she says. “It was quite a revelation.”

Moorhead, who grew up in a small town in Ohio as the daughter of a dentist and travel agent, built a career in health policy. By 2000, she was leading the Alliance to Improve Medicare, advocating for passing a Medicare prescription drug benefit, which culminated in the Medicare Modernization Act of 2003. For eight years, she worked as the head of what was then called the Disease Management Association of America.

“The core work there was to develop a framework of how to assess individuals on the healthcare continuum,” she says.

“What I bring to the table is an effective ability to build partnerships, to assist and direct, and to develop strategic vision,” Moorhead says.

The board wanted someone who was ambitious and ready to take the organization “to the next level,” says AANAC Chairwoman Stephanie Kessler.

“She has a lot of the qualities that we were looking for,” Kessler notes. She added that combining the group’s conferences for a larger show in April is owed in part to Moorhead.

“She’s been wonderful in pulling the team together,” Kessler says. “She’s just a really good leader.”

Moorhead said a huge goal for 2019 is highlighting how the organization can help providers adjust to the Patient-Driven Payment Model, and looking to partner more with organizations such as the American Health Care Association and LeadingAge.

“Tracey is a successful association leader who has done a great job in creating start-up associations and in helping traditionally successful associations have a broader vision of themselves, and a more progressive business plan,” says retired LeadingAge CEO and President Larry Minnix. “Also, she is an outstanding advocate. She’s a winner whom we can follow into battle.”

While Moorhead visits the AAPACN office in Denver regularly, she has kept her home base in northern Virginia. She remarried last year and lives with her husband, Mark, and children: 15-year-old Ava, 13-year-old Jackson and 11-year-old Ruby. The family makes a point of eating together, with the added dimension of cooking meals together.

Even without the Foreign Service, foreign travel still is a priority. Moorhead notes how spending time during high school living in Switzerland  impacted her profoundly. She has made it a point to take her children to places such as Paris, London and Rome.

“I love this city and its cultural aspects,” she said. “Early on, I considered it my home.”

Starts as executive director at Alliance to Improve Medicare

Serves as head of the Disease Management Association of America (DMAA), now known as the Population Health Alliance

Moves to Visiting Nurse Associations of America as president & CEO

From the March 1, 2019 Issue of McKnight's Long Term Care News 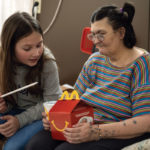