Three states are participating in a yearlong Medicaid project that could help share risk between states and the federal government, the National Governors Association said this week.

The goal of the project is to form “agreements in concepts” that allows each of the states to reach agreements with the Department of Health and Human Services. These may mean waivers, amendments, performance partnerships or other plans. It could also include shared risk between states and the federal government. The states will work with experts within the NGA Center for Best Practices.

Twenty-seven states and the District of Columbia, including Washington and Nevada, have expanded Medicaid coverage under the Affordable Care Act. Alabama, whose governor has said he opposes ACA Medicaid expansion, has a proposed Regional Care Organization system, which would be a managed care system for Medicaid beneficiaries. RCOs have to sign contracts with the state’s beneficiaries by Oct. 1, 2015.

In other state Medicaid news, a Washington Post poll found that majority of Virginia residents support an expansion of the Medicaid program. 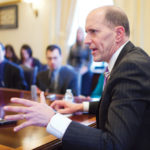