Providers are calling on the federal government to create a dedicated fund for skilled nursing operators — like it did for hospitals — to aid them in their coronavirus response.

“Skilled nursing facilities have received some funding from the initial allocations of the $70 billion, but nowhere near what’s necessary to adequately fight the fight,” said Mark Parkinson, president and CEO of the American Health Care Association/National Center for Assisted Living.

The AHCA is specifically calling for the federal government to set aside $10 billion in relief funding for skilled nursing facilities. Parkinson explained at a Wednesday press briefing that all providers are spending extreme amounts of resources on additional supplies, equipment, overtime and “hero” payments for workers and various other efforts to try and keep the disease out of their buildings, or contain it.

He conceded it was understandable that the federal government prioritized hospitals first after initial predictions showed that they could be overrun with patients. But thanks to stay-at-home orders around the country, that’s not happening at the predicted rates, he noted, so it’s time to shift the focus to nursing homes.

“Our specific ask to HHS is that it create a fund for nursing home residents and staff — just as it has for the hospitals — so that we can fight this fight,” Parkinson said.

The $2.2 trillion federal stimulus package included $175 billion to be distributed by the Department of Health and Human Services to healthcare providers, he noted. He added that there is now roughly $105 billion left in that fund after the first wave of disbursements took place last week.

“It’s now time to really turn our attention to long-term care facilities where this battle continues to take place every single day,” Parkinson said. “When you look back over the last couple of months, it’s very obvious that the long-term care profession has been left out. It has been forgotten and the residents have not had the resources they need in this battle. Now, it’s time to turn that around.”

In other coronavirus-related news:

• Federal lawmakers are threatening more oversight of nursing homes in the wake of the coronavirus pandemic. Sen. Chuck Grassley (R) on Friday suggested that the pandemic confirmed there’s been a lack of oversight in nursing homes and long-term care facilities, Inside Health Policy reported.

“Without strong oversight and enforcement of laws and regulations, accountability and compliance can fall short,” Grassley said.

• In brighter news, residents at an Alabama long-term care facility were treated to a car and motorcycle show this week. More than 100 vehicles paraded around the facility and residents watched outside while wearing facemasks and following social distancing guidelines. 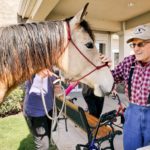