President Trump’s abrupt decision to halt negotiations between his staff and federal lawmakers on another COVID-19 relief bill until after the election could mean doom for residents and workers at long-term care facilities, providers warned Tuesday.

“It is reckless, callous and cruel to walk away from older Americans as the pandemic worsens,” Katie Smith Loan, LeadingAge president and CEO, said. “Shutting down any hope of additional resources to fight the pandemic is surrendering to the virus, and recklessly endangering more lives.”

Sloan’s comments came in response to Trump’s initial tweet that he’s instructed his representatives to “stop negotiating until after the election, when immediately after I win, we will pass a major Stimulus Bill that focuses on hardworking Americans and Small Business.” He also criticized a $2.2 trillion coronavirus relief bill passed by Democratic-held House last week.

He later retreated from the earlier statement and tweeted he would be ready to sign a package to provide aid for the Paycheck Protection Program and airlines.

“Without replenishing funds for federal and state agencies, healthcare facilities, including nursing homes and assisted living communities, could find themselves less than completely prepared for the challenges of the upcoming cold and flu season, which could inevitably result in an uptick in new COVID cases,” said Mark Parkinson, president and CEO of the American Health Care Association/National Center for Assisted Living, in a plea Tuesday for additional support.

Sloan added that aging services providers have “sounded the alarm for seven months” but have only received partial solutions from the federal government.

“As the pandemic continues to rage, providers are struggling to pay for tests and address severe staffing shortages. They are in desperate need of a federal lifeline to carry them through this crisis,” she said.

“It is stunning that the president is ending the stimulus talks with congressional leaders, while declaring that the ‘best is yet to come,’” she added.

Overall, Congress has provided about $175 billion to the Department of Health and Human Services’ Provider Relief Fund, which provides relief to healthcare providers impacted by COVID-19. About $10 billion of that funding has specifically been dedicated for nursing homes. The federal government has also provided point-of-care testing devices to nursing homes and assisted living facilities across the country.

AHCA/NCAL has pushed for an additional $100 billion to the fund with a “substantial portion” dedicated to long-term care.

He said it specifically needs to add more money to CARES Act funding, and include “a specific” allocation to long-term care, covering both skilled nursing facilities and assisted living buildings. “AL buildings have been helped but haven’t been helped enough, by a long way,” he explained.

“As long as we can get another stimulus bill by the end of year, I’m optimistic that the sector can survive to a vaccine,” Parkinson said. “Then the question is once get past the vaccine, how long does it take for census to recover? Once we get to the vaccine, we’ll be on our own and need to be able to get on our feet and get census back.” 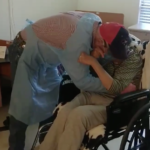 For husband and wife of 66 years, at long last, a hug