If there’s one aspect of Alise Ionashku’s childhood that stands out, it’s the desire of her and her three older brothers to make their immigrant parents proud.

“One thing they drilled into all of our heads is that, ‘We did not bring you here for you guys to fail.’ We finally realized that they did so much for us, that’s the least we can do for them: We can show them we are going to succeed.”

When the Ionashku family emigrated from the Ukraine in 1990 after showing they were being persecuted for their Seventh-Day Adventist beliefs, Helen Ionashku says her great hope was that her children would receive a good education.

“I left everything I knew — I didn’t know a lick of English,” she says. “We sacrificed everything for them to have a future.”

Little did she know that 20 years later both she and her daughter would be attending college classes on long-term care together. Helen Ionashku is now the CEO at Madisonville Health & Rehab in Madisonville, TN, while Alise is an administrator at Starr Regional Health & Rehabilitation in Etowah, TN, about 15 miles away.

The younger Ionashku, 29, lived most of her childhood in California. Her father worked as a truck driver and later started his own business, and the family eventually relocated to Tennessee. Ionashku, then 15, experienced culture shock. But she continued to work hard, partially based on her parents’ expectations.

They “wanted us to be as integrated with the American lifestyle as possible,” she says. At Southern Adventist University, she started as an accounting major. But she wanted something with more purpose, she says. 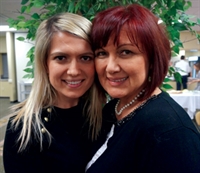 “I started praying about it and long-term care showed itself,” she says. Meanwhile, her mother, upon hearing about the long-term care classes, said, “I’ll do that too.” They studied, graduated and started at Ethica Health.

“When I did my internship with Ethica, I got to see there was a purpose there,” Alise Ionashku says. “You are doing the right thing for patients at the end of their lives.”

“She worked her way through all the departments in the facility,” he says. “She’s one of my favorite people, and gives me hope our industry will be secure for years.”

Ionashku says she enjoys working in a rural facility, and being in a place where she can “contribute and help improve.” Engaged to be married in September to Scott Miller, she enjoys reading  (“The Great Gatsby” is a favorite). She’s traveled widely, with a graduation trip to Australia and New Zealand among the highlights.

Religion, which was the driving force behind how the family immigrated, continues to be a major part of her life and work, including morning meetings with prayer. “When things are getting really sticky, it helps calm everyone,” she says.

For her part, Helen Ionashku says her daughter is her inspiration. The pair will often have lunch or call each other when faced with a tough work decision.

“We have a built-in partner,” Helen Ionashku says. “She’s beautiful inside and out and I’m not saying that just because she’s my daughter.”

From the February 01, 2017 Issue of McKnight's Long-Term Care News