“The biggest concern right away is staffing. You keep hearing, ‘What if they leave you?’ and all that boogeyman stuff,” Randy Bury, president and CEO of Good Samaritan told McKnight’s Long-Term Care News on Friday. “But there’s a flip side to that, and I’ve seen it in my emails this week. There’s vaccinated staff who are very, very happy that we’re mandating this so they don’t have to worry about being the next breakthrough case or taking the virus home to their kids.”

Good Samaritan merged with Sanford Health in 2019. It was Sanford that officially announced the new mandatory vaccine policy in an email to all employees on Thursday. While the system reported more than 90% of its clinicians and 70% of nurses organization-wide had already been vaccinated, Bury said that rate was just 58% among skilled nursing employees.

With more than 8,600 beds, Good Samaritan was named the largest non-profit multi-site senior care organization based on nursing care in the 2020 LZ200 listings. Bury said it is important for his organization to take a leadership position on vaccines, especially as breakthrough cases began to threaten its skilled nursing residents.

“Somebody’s got to be the leader and someone’s got to say it’s the right thing to do,” Bury said. “I hope we’re a contributor to that critical mass and start the ball rolling down the hill.”

Sanford and Good Samaritan’s decision comes after several senior living organizations adopted mandate policies over the last few months. Most of those mandates have come from small and midsize providers.

But the last two weeks have brought a flurry of mandate activity, including policies from several major medical societies and provider organizations supporting mandates.

Will it ‘start the ball rolling’?

Bury, an American Health Care Association board member, said that organization is discussing issuing its own position paper, one that he hopes will be similar to that of the American Hospital Association. AHA on Wednesday said it supports providers “that adopt mandatory COVID-19 vaccination policies for healthcare personnel, with local factors and circumstances shaping whether and how these policies are implemented.”

Until now, Good Samaritan has used education and outreach to promote vaccine uptake, holding multiple clinics beyond those offered through the federal partnership and getting residents involved. In one facility, a resident who became a major proponent of vaccines agreed to have her photo used in a poster asking staff, “Are you as tough as a 98-year-old?”

Despite leaning on medical directors and directors of nursing to provide one-on-one messaging, Bury remained disappointed with the numbers.

“The ‘why’ is so incredibly simple: Vaccines make our residents as safe as possible,” he said. “Frankly, I’m tired of the time, the effort and the attention we constantly have to put into this conversation. If everyone were vaccinated, this thing would be over by now.”

He doesn’t put much stock in concerns about current vaccine options not having full federal approval, citing public health leaders who back the shots’ efficacy and overall safety. And after losing “minimal employees” after instituting a mandatory flu shot program more than two years ago, he doesn’t expect complaints about the policy will translate to a mass exodus.

Employees will have until Nov. 1 to get vaccinated, and the organization will grant religious and medical exemptions. That deadline aligns with annual flu vaccine requirements and also gives the organization more time to educate and motivate reluctant employees.

“The last thing we want to do is lose any staff member over this,” Bury added. “But it’s not only about people who already work for us. It’s people contemplating their next job, or just coming out of college. … We actually think it will be an attraction for them.” 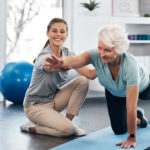