Modest expansions of meal delivery programs could reduce the number of Medicaid beneficiaries in nursing homes, but such a plan would not be cost-effective in every state, according to newly published research.

However, the nationwide 1% expansion would cost more than $117 million and reduce Medicaid spending by only about $109 million, according to the researchers. This is because several large states, including Florida and California, have relatively few “low-care” residents and/or low Medicaid per-diem rates for nursing homes.

The researchers found that 26 states would see a net Medicaid savings if they pursued a 1% expansion of meal delivery programs. These include several populous states, including Massachusetts, New York and Ohio.

“We’re not proposing that all states simply increase the proportion of age 65 plus receiving meals by 1%,” stated lead author Kali Thomas, Ph.D. “But if they were to target these vulnerable people who are at risk for nursing home placement they would likely see more savings.”

Even a 1% increase might seem unrealistic, considering that Meals-on-Wheels has reduced services after being hit by sequestration cuts. However, meal delivery programs are conducted under the federal Older Americans Act, which is up for reauthorization. A bipartisan version of the bill was introduced in Congress shortly before the current federal government shutdown began.

The findings appear in the current issue of Health Affairs. 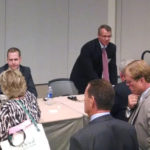