Researchers have established a pattern of ongoing symptoms that may follow patients after hospitalization for COVID-19.

Study participants included 100 patients discharged from a university hospital in the United Kingdom. Among the patients, 32 were critically ill and had been admitted to an intensive care unit and 68 were hospitalized on wards and did not require intensive care. They were interviewed four to eight weeks after discharge by rehabilitation therapists using a standardized screening tool.

The most common symptoms, in order of prevalence:

“The emerging evidence is that for some, the road to recovery may take months,” said first author Manoj Sivan, M.D., of the University of Leeds.

The post-discharge health problems experienced by hospitalized COVID-19 patients are similar to those of patients who contracted SARS during a 2002 outbreak and MERS patients in 2012, the authors reported. Sivan and colleagues previously have predicted COVID-19 outcomes and rehabilitation needs based on these histories.

The researchers now plan to investigate long-term symptoms in COVID-19 patients who were not hospitalized.

The study was published in The Journal of Medical Virology. 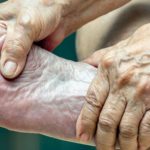 Focus on foot care: Some amputations increasing in older adults with diabetes