“What’s your take on bundled payments?”

About a year ago, investors and analysts would occasionally ask us some form of this question. Now, virtually every time we talk with investors, analysts, and bankers, they ask. At the end of answering questions on the topic for 45 minutes during one of these recent meetings, the investor laughed and incredulously said, “So, basically you’re the only ones saying, ‘No big deal. Nothing to see here.  Business as usual.”

There’s a lot of hand-wringing in the post-acute world these days as observers try to predict just how material the constant changes to reimbursement will be for the operators. It seems generally believed that bundled payments expansion is a net-negative for the industry since it partly exists to lower Medicare payments. There will be “losers” who don’t adapt to the changes. But, there will also be “winners.” There always have been. As a former operator and current investor in the space, I have a positive view on what these changes mean for the profession.

I entered the skilled nursing profession as an administrator-in-training at The Ensign Group in California in 2001. One of the first themes I picked up on from the seasoned ED/DNS/DORs around me was that, “this isn’t your grandmother’s nursing home anymore. No, you see, while we still provide long-term custodial (I will always hate that term) care, we now specialize in providing short-term rehabilitation for Medicare and HMO patients.”

For the last 15 years, the best operators have been adapting to the demands of the hospitals (higher acuity, readmission rates), CMS (MDS/RUGS changes, 5 star ratings, compliance), and HMOs (shorter length of stay, case management, collaboration).

“So are you worried about this Joint Replacement thing?

On April 1, 2016, the Comprehensive Care for Joint Replacement (CJR) went into effect in 67 markets. Briefly, the CJR holds the participating hospitals financially responsible for the episode of care from the day of admission until 90 days later for major joint replacement or reattachment of lower extremity joint replacements (LEJR), hips and knees.  If a hospital can lower the cost of that 90 day episode of care below targets set by CMS, they will reap the financial rewards with a bonus.  The opposite is also true.  Some warn that allowing hospitals to waive the required three night hospitalization before discharging CJR patients to SNFs rated 3 star or better will crush the 1-2 rated facilities.  Others warn that hospitals will be incentivized to send CJR patients directly home with Home Health, bypassing SNFs altogether, because of the cost savings. In my opinion, these predictions have been overblown.  The sky is not falling.
Now sing it with me … “You Tell Me That’s It’s Evolution”
I understand why outside observers worry that this as a seismic shift for skilled nursing (and HH for that matter). How, then is CJR not the end of the world for post-acute facility providers? Again, I see CJR as a positive step for post-acute care because it advances trends that level the playing field for stronger operators, ultimately benefiting the patients.  Here’s what I mean.
Length of stay: HMOs have been pressuring SNFs to shorten length of stay for many years.  The last facility I personally ran was 100% short-term rehab. Our combined Medicare/HMO average length of stay was in the mid-teens.  Strong providers have been equipping themselves to shorten length of stay for years. They will employ similar practices on these LEJR Medicare patients that they have been using on HMO patients, thus gaining CJR market share from those who don’t.

Case Management/Data Reporting: Try competing in a market where your competitors employ the hospital discharge planners as part-time social workers on the weekend or pay kickbacks for referrals. What? It happens. today. I’ve competed against it. The only way we could “level the playing field” was to be BETTER.

We had to build strong, data-driven (readmission rates, satisfaction scores, survey results, clinical outcomes) relationships with the hospitals that earned our admissions. We had to reach out to hospitals years before ACOs or BPCI to “show them the data!”  How does CJR impact this?  It should put a vice on the unethically influenced placement of patients and make the market for post-acute patients more merit based.  For the many hospitals that didn’t care about their post-acute discharge system, now they will.  Stronger operators are poised to gain CJR market share because of it. 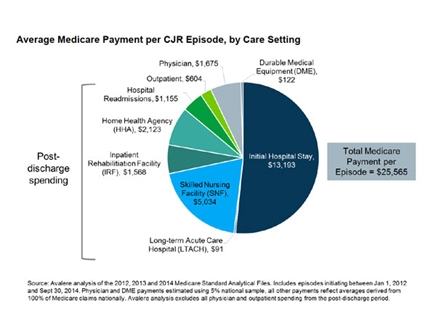 CMS Star Rating:  As soon as the star ratings came out years ago, we complained because the system doesn’t necessarily reflect quality care. In the short-run, hospital may use star ratings in their discharge calculus. But, they’ll evolve as well. SNFs who are 1 or 2 stars can still receive joint replacmenet patients.  And, here’s the thing, patients who are ready to be DC’d from the hospital after a night or two have already been heading home with HH for years. Patients that have to go to the SNF have an initial hospital stay past 3 days anyway.

Readmission Rates: At the end of the day, the cost of caring for that patient for 90 days depends greatly on whether or not the patient is readmitted to the hospital. Hospitals are going to be very sensitive to which post-acute location gives them better odds of not having a re-hospitilization.

Where would you send them?  To the strong SNF provider with 24-hour RN coverage, a medical director, in-house therapists, wound care professionals, etc. or the patient’s home with her elderly husband to care for her in between the hour or so/day she gets from HH. Both graphics below from Avalere, show hospitals the need to partner with SNFs with the lowest readmission rates. It’s no wonder CMS is adding readmission rates to the star rating system this summer. While there may be a slight tightening on the flow of LEJR patients for the general industry (only for 67 markets for now), the strong providers will be able to capture greater share of that theoretical smaller piece.  But, let’s not forget the rest of the pie!  Sometimes it seems that outside observers focus so much on the joint-replacement piece of the patient pie that they forget a few key points:

What does this all mean for investing in skilled nursing real estate? It has always been true that in healthcare real estate, the operator matters most. The playing field has been changing for the last 15 years. BPCI/CJR actually has the potential of slightly leveling the playing field in behalf of stronger operators. BPCI/CJR can’t be ignored and should be a factor in underwriting acquisitions. Higher lease coverages and cap rates are in order for facilities with lower star ratings and higher readmission rates as those metrics become more and more impactful on a provider’s ability to shift patient mix and capture short-term rehab market share.

Today (and tomorrow), more than ever before, your SNF real estate investment will hinge on the quality, sophistication, and culture of the operator running it.

Dave Sedgwick is the VP of Operations for CareTrust REIT, a healthcare REIT that invests in seniors healthcare and living real estate across the country.  Prior to CareTrust, Mr. Sedgwick served as the SNF executive director of 5 facilities in 3 states and as the Chief Human Capital Officer for The Ensign Group. His healthcare investing and leadership blog can be found at http://LeadingLTC.com