A new, non-invasive and inexpensive imaging procedure can see signs of Alzheimer’s disease in a matter of seconds, according to two new studies presented in October at the 2018 Annual Meeting of the American Academy of Ophthalmology.

Optical coherence tomography angiography (OCTA) is an eye scanning technique that enables physicians to see the smallest veins in the back of the eye, including the red blood cells moving through the retina. Because the retina is connected to the brain by way of the optic nerve, Duke University researchers hypothesized that deterioration in the retina and its blood vessels may mirror the changes going on in the blood vessels and structures in the brain, thereby offering a window into the Alzheimer’s disease process.

To test this, they used OCTA to compare the retinas of Alzheimer’s disease patients with those of people with mild cognitive impairment, as well as healthy individuals. They found that the Alzheimer’s group showed a loss of small retinal blood vessels at the back of the eye, and that a specific layer of the retina was thinner. Even people with mild cognitive impairment did not show these changes.

Researchers from Sheba Medical Center in Israel conducted a similar study with 400 people who had a family history of Alzheimer’s disease but showed no symptoms themselves. They found that the inner layer of the retina was thinner in people with a family history, compared to those without a family history.

“This project meets a huge unmet need to detect this disease earlier and introduce treatments,” said Sharon Fekrat, M.D., an ophthalmologist and lead author of the Duke study.

From the December 2018 Issue of McKnight's Long Term Care News 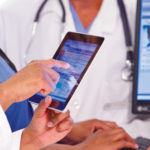