A New Jersey nursing home could be on the hook for more than $12,000 in penalties after one of its workers repeatedly hung up on a deaf social worker.

Nicole Perkins worked at a local hospital system and was trying to contact Atrium Post Acute Care of Wayne, NJ, on behalf of a client, who also had hearing loss. An Atrium employee repeatedly hung up on Perkins on a day in May of 2016, Attorney General Gurbir Grewal announced in December.

“This was a troubling case because there simply is no excuse for a nursing home — of all places — to repeatedly refuse to accept a telephone call from an operator calling on behalf of a deaf person,” Grewal said.

To resolve the allegations, Atrium must pay Perkins $2,500, along with being subject to a $10,000 “suspended state penalty.” The latter fine would be reinstated if the nursing home defaults on any terms of the settlement or commits a new violation over the next two years.

Atrium also must train employees on services and devices used by the deaf and hard of hearing.

Perkins had used a service called Purple Communications, which involves an operator relaying the call via text or FaceTime to the intended recipient, letting them know a deaf individual is trying to connect.

The Atrium employee repeatedly refused the operator’s attempts, and later told investigators that he thought it was a robocall.

Atrium employees, in interviews with the Division of Civil Rights, admitted they were unfamiliar with such relay-assisted calls.

Atrium said in a statement that the employee’s actions were unintentional, and it’s since taken steps to prevent it from occurring again. 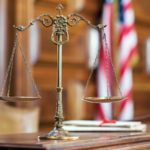