At 87, Grace Royal was ready to sign her life away. Forget the risks. She wanted her long-awaited hot air balloon ride above the rolling countryside of coastal Georgia. Beside her for the hour-long ride was Brigham Hodges, the resident services director at PruittHealth-Bethany. As they rose above the day’s fair-weather clouds and called out to feeding cattle below, it was Royal who comforted Hodges’ nerves.

“She was constantly asking me about how I was doing,” Hodges recalled. “She herself was very in awe. Once you get above the bed of clouds, it was very beautiful. She enjoyed all the wildlife she could see.”

Royal’s ride in the hot pink balloon back came about thanks to a partnership with Second Wind Dreams, which allowed the nursing home to pick a lucky resident to bless with a dream come true.

Hodges said Royal had told others about her hopes for a hot-air balloon ride, but she didn’t actually speak up when staff asked for ideas. Workers heard rumblings, and they eventually convinced her to throw her name in the hat.

Hodges added a second surprise. He had Royal’s son, estranged for two years, meet them at the departure field in nearby Statesboro, GA. Since the outing, he’s been visiting Royal about once a week, Hodges said. 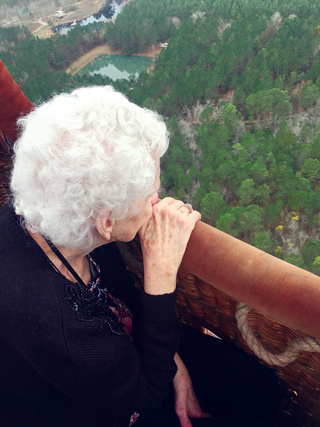 This month, Royal’s adventure won Pruitt Health-Bethany second place in a company-wide contest that encourages building staff to create special moments for residents that show caring and compassion. The building will get $25,000 for a renovation project, while staff will also get a $750 party.

(To read about the first place winner’s project, click here.)