The average number of deficiencies per nursing home has dropped in recent years, but staffing levels are still falling short of what some experts recommend, according to a new report from the Kaiser Family Foundation. 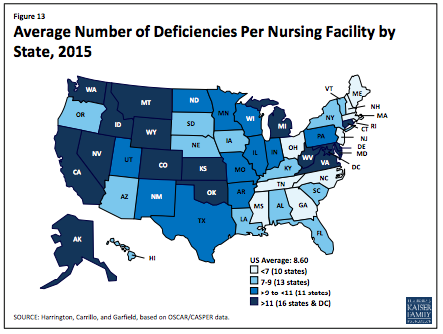 The percentage of nursing facilities that received no deficiencies followed a similar pattern, rising from 7% in 2011 to 8% in 2013, before dropping again to 7% in 2015. In 2015 more than one-fifth of facilities had a deficiency for actual harm or Immediate Jeopardy, Kaiser found.

The most commonly cited deficiencies were reported in the areas of infection control, accident environment, food sanitation, quality of care and pharmacy consultation.

The report also showed total nursing hours averaged 4.1 hours per resident day in 2015, a slight bump from 3.9 hours in 2009. But despite the increase, the level still falls short of recommendations from some experts, Kaiser noted. That includes a panel of University of California researchers that suggested levels of 4.55 hours per resident day in an article in The Gerontologist. The report’s authors said that future research into facility and resident characteristics should focus on “whether and how new requirements are affecting care and outcomes and to identify additional areas of concern for future policy changes.”