A troubling proportion of hospices fail to provide skilled nursing care to patients approaching death or who are experiencing a crisis such as increased pain, according to a lengthy Washington Post article published Saturday. The Post report appeared one day after the government proposed increasing Medicare hospice payments in 2015.

About one in six hospice agencies did not provide any continuous home nursing care or inpatient care in 2012, according to a Post analysis of “millions” of Medicare records. Continuous care is called for when a patient has symptoms, such as breathing difficulties or seizures, that require constant attention. It can be provided at home or in a setting such as an inpatient hospice or a skilled nursing facility.

The trend has been for hospices to provide less continuous care, the Post reported. About 13% of hospices did not bill for either home or inpatient crisis care in 2002, but that had increased to 18% as of 2012, the newspaper’s investigators determined.

The Medicare billing structure might explain this situation: While Medicare reimburses hospices at a higher rate for continuous care than routine care, providing constant nursing can cut into bottom lines, some hospice owners told the Post. It also can be difficult from a staffing perspective, and it can be a challenge to contract with inpatient facilities to take hospice patients, the owners noted.

However, representatives of the hospice industry did not defend providers who fail to furnish crisis care.

“Even one case of a patient not receiving the care necessary to address pain and symptoms is one too many and is unacceptable,” said J. Donald Schumacher, president of the National Hospice and Palliative Care Organization. “But such examples, however painful to read, do not represent the majority of hospice providers or the hospice community as a whole.”

If the government’s proposed 2015 rates take effect, hospices would see a 1.3% increase in Medicare reimbursements next fiscal year. This would translate to a $230 million boost from current levels, according to the proposed rule issued Friday. The rate for continuous home care would increase from about $910 a day to $930, and general inpatient care would increase from $694 per day to $708. 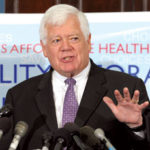