Lighter weights may be just as effective as heavier ones in growing muscle, research finds - McKnight's Long Term Care News

The key to building muscle mass is achieving muscle fatigue, not necessarily lifting the heaviest weight, according to new research that could have implications for senior therapy providers.

Researchers at McMaster University have shown that lighter weights can provide the same muscle growth as heavier weights. Participants in the study were given sets of weights corresponding to a percentage of what they were physically able to lift. People could lift the heavy weights five to 10 times before fatigue set in; people could lift the lighter weights 24 times before fatigue set in.

“Rather than grunting and straining to lift heavy weights, you can grab something much lighter but you have to lift it until you can’t lift it anymore,” said Stuart Phillips, associate professor of kinesiology at McMaster University.

The findings could have an impact on those with compromised skeletal muscle mass, including the elderly and patients recovering from trauma, surgery or stroke. The report appears in PLoS ONE. 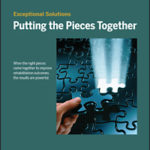