Major surgery may promote or accelerate Alzheimer’s disease, the authors of a new study contend.

A link between cognitive decline and major surgery has been suspected for some time. In the current investigation, researchers sought to discover whether surgery triggers the appearance of Alzheimer’s symptoms in brains that already are affected by amyloid-β brain plaques.

Results showed that half of the patients had worse cognition after surgery than beforehand. And participants with altered amyloid-β levels also exhibited memory problems consistent with the onset of Alzheimer’s disease, reported Carmen Lage, of the Marqués de Valdecilla-IDIVAL University Hospital, in Spain.

“Before the surgery, the memory test scores of the subjects with abnormal amyloid-β levels were indistinguishable from those of subjects with normal levels, and yet after surgery, they were significantly worse,” Lage said. “These results lead us to the conclusion that major surgery can trigger different patterns of cognitive alterations, depending on the previous presence or absence of Alzheimer’s pathological changes.”

A patients’ cardiac or respiratory function is always evaluated for safety reasons prior to  surgery, the researchers added. “Our results would advocate that pre-surgical evaluation studies include cognitive tests,” said Pascual Sanchez-Juan, M.D., Ph.D., also of Marqués de Valdecilla-IDIVAL University. A pre-surgery analysis of Alzheimer’s biomarkers would also make sense, “especially once these become widely available in plasma,” he concluded.

Full findings were published in the Journal of Alzheimer’s Disease. 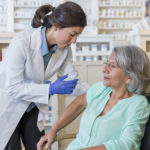