Oral and inhaled corticosteroids may to harmful to bone health in asthma patients, a new study finds. Clinicians should minimize or step down these prescriptions when respiratory symptoms and exacerbations are well-managed, the authors contend.

The researchers analyzed how steroid exposure affected bone health in patients with asthma, osteoporosis or fragility fractures when compared with a control group. They also tracked the number of bisphosphonate (bone loss prevention drug) prescriptions received.

A clear link was found between the number of steroid prescriptions, cumulative doses and risk, they reported. The more steroid prescriptions received within a year’s time, the more likely patients were to experience bone loss and fracture, wrote Christos Chalitsios, a Ph.D. candidate at the University of Nottingham, in England, and colleagues from its Division of Respiratory Medicine.

For example, two to three oral corticosteroid (OCS) prescriptions were tied to greater odds of osteoporosis, with those receiving more OCS prescriptions and cumulative doses in the previous year being at greater risk. Similarly, more than nine OCS prescriptions in the prior year had a significant impact on the likelihood of sustaining a fragility fracture. Inhaled steroids also had an effect, albeit relatively smaller, on bone loss and fracture as well.

Notably, only a small percentage of inhaled corticosteroid users at high risk of bone loss were prescribed a bisphosphonate drug after being prescribed their first steroid, the researchers added.

Oral corticosteroid prescriptions are increasing as the number of asthma cases continue to grow, according to Chalitsios. In the absence of bone protection guidance for these patients, the current study offers clinicians a source of stratified bone health risk by dose, number of prescriptions, and type of steroid drug, they concluded.

The study was published in the BMJ journal Thorax. 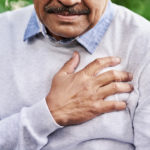