University of Michigan researchers have found relatively minimal changes in central nervous system-active medication use among Michigan nursing home residents with dementia following the start of the COVID-19 pandemic, a finding that may be explained in part by regulatory pressures to reduce antipsychotic prescribing in U.S. skilled nursing facilities.

With the disruptions in daily routines and greater social isolation that occurred as a result of the COVID-19 pandemic, researchers said they expected that neuropsychiatric symptoms such as agitation, depression and anxiety likely would be exacerbated among long-term care residents with dementia. As a result, they expected a greater reliance on psychotropics such as antipsychotics.

After examining medication use among nearly 36,000 nursing home residents with dementia across 440 long-term care facilities in the state, however, they found no increase in antipsychotic use, with only minimal increases in antidepressant (2.4%) and opioid (1.7%) use.

These findings, published in the Journal of the American Geriatrics Society, differ from recent studies in the United Kingdom and Canada that showed small but significant increases in antipsychotic prescribing following the pandemic, study authors noted.

“Differences observed may be due in part to regulatory pressures to reduce antipsychotic prescribing in U.S. nursing homes through initiatives such as the Centers for Medicare and Medicaid National Partnership to Improve Dementia Care,” they wrote.

Despite these efforts in the United States to decrease the use of antipsychotics, new research out of Spain suggests that antipsychotics may protect against COVID-19 or lead to a milder course of illness.

“These are very interesting findings that reflect a clinical reality where we see few patients with severe COVID-19, despite the presence of various risk factors,” study investigator Manuel Canal-Rivero, Ph.D., a clinical psychologist at Virgen del Rocio University Hospital, Sevilla, Spain, said in a news release. 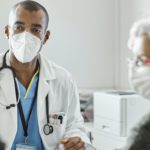 Here’s how elders want you to talk to them about deprescribing: survey