A tendency toward resilience is common in seniors, but the strain of continued coronavirus lockdown in eldercare communities is beginning to show, say providers.

While some seniors may be habituated to having most of their contact with staff, the longer social isolation continues, the greater the toll, a Florida continuing care community psychiatrist told Kaiser Health News.

The more vulnerable the resident due to mental or physical health issues, the more difficult extended isolation will be, doctors say.

“If this goes on for months longer, I think we’ll see more people with functional decline, mental health decline and failure to thrive,” said Jennifer Olszewski, a Philadelphia gerontologist who works with residents in three nursing homes.

Loneliness has been linked to physical illness, including dementia, metabolic syndrome and cardiovascular disease. “This is our body alerting us to a threat,” gerontologist Elizabeth Dugan, Ph.D., told The Boston Globe.

Experts interviewed by Kaiser Health News provided the following suggestions for supporting residents who may be negatively affected (summarized):

1. Don’t try to counter the person’s perception and offer false reassurance. Tell them it’s understandable to be angry and sad.

2. Offer a sense of companionship. Explain that while you can’t change the situation, you can be there with them now and check in later.

3. Do not expect older adults to admit feeling depressed. Some may describe physical symptoms instead, such as fatigue, difficulty sleeping, and difficulty concentrating.

4. Treat frequent expressions about being a burden and notable withdrawal as a worrisome sign.

5. Ask for a referral to a psychologist or social worker, especially when a resident is recovering from COVID-19 hospitalization.

The Centers for Medicare and Medicaid Services recommends that nursing homes do not allow visitors again until phase three of their state’s reopening plan is in place. In addition, facilities should have no new nursing-home onset COVID-19 cases for 28 days and adequate access to testing, the agency states. 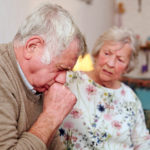