Adults over the age of 65 are more likely to contract COVID-19 again — with only 47% protection against repeat infection compared with 80% for younger people, according to a new, large-scale study from Denmark.

Studies to date have found that COVID-19 reinfection is rare; prior infection is protective for at least six months, the current study confirmed. Using data collected from the two-thirds of Denmark’s population that received testing in 2020, investigators also found that only 0.65% of patients tested positive twice on a polymerase chain reaction test during the country’s first and second waves. This was compared with 3.27% of people who tested positive after first testing negative.

The study also confirmed the rarity of reinfection in a sub-analysis of healthcare workers, whose estimated protection against reinfection was 81%.

An earlier study in a Kentucky nursing home also may underscore the risks of reinfection in this population. Not only did five residents test positive twice for SARS-CoV-2 in two separate outbreaks three months apart, but the symptoms were worse the second time around, investigators said.

The results of the current study highlight the importance of continuing to protect the elderly against COVID-19 and suggest that vaccination is highly advisable, even among those who already have had the virus, the authors said.

“Since older people are also more likely to experience severe disease symptoms, and sadly die, our findings make clear how important it is to implement policies to protect the elderly during the pandemic,” concluded lead author Steen Ethelberg, Ph.D., from the Statens Serum Institute, Denmark.

The current analysis focused on the original COVID-19 strain, and there was no assessment of variants due to the study’s relatively early timing.

Full findings were published Wednesday in The Lancet. 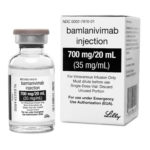 Feds halt an Eli Lilly antibody therapy in 3 states due to variant fears, while boosting the treatment overall