A dramatic racial and ethnic gap exists in influenza vaccination rates among short-stay and long-stay nursing homes residents, a new study has found. Intervention could reduce these disparities by up to 60% and may reduce infection risk facility-wide, the researchers say.

Quality of care measures were linked to low rates of vaccination among short-stay residents. These included for-profit facilities and/or those with a greater proportion of Medicare as primary payer, higher acuity index, percent of residents on an antipsychotic medication, and certified nursing assistant hours per resident, Riester and colleagues reported.

Notably, tube feeding was an important positive contributor to the disparities across all comparisons. Ethnic minorities are more likely to be tube-fed when compared with white individuals, the researchers wrote, although the link between tube feeding and influenza vaccination disparities is unclear.

“Tube feeding may be a proxy for other things, such as poor resident health status, goals of care that favor life-prolonging measures, or nursing home quality of care,” Riester said.

Low vaccination coverage among short-stay residents may affect the entire nursing home population, the authors added. This is especially true if ambulatory residents are able to roam freely, potentially exposing other residents to respiratory illnesses, they noted.

Public health solutions to the problem remain unclear in the absence of research into links between quality measures and vaccination rates. What’s more, disparity due to unmeasured factors was significant in the current analyses, Riester wrote. But the results suggest that equalizing 27 observable characteristics would reduce the disparity in influenza vaccination by 38% to 59% depending on the racial/ethnic comparison, she and her colleagues estimated.

In the meantime, tracking vaccination rates in nursing homes to detect and intervene in racial and/or ethnic differences may mitigate these disparities until more qualitative data are available, the authors concluded.

The study was published in JAMDA. 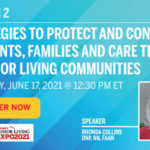