A great deal of recent research has explored the link between repetitive brain injury and dementia but a new study claims to have found the onset of the disease occurs much earlier than suspected.

After studying a large group of deceased athletes and military veterans with a pathologically diagnosed neurodegenerative disease called chronic traumatic encephalopathy, researchers at Boston University Medical Center have concluded that such individuals were four times more likely to develop beta-amyloid deposits in their brains and that in general this occurred 10 to 15 years earlier than in the normal aging group.

Excessive beta-amyloid deposits are common in the brains of people with dementia.

Study authors said they hope their research will lead to the development of diagnostic tools and treatments for the long lasting effects of head trauma. The research appears online in a recent issue of the journal Acta Neuropathologica. 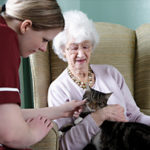