These rules cut the time between the filing of a union election petition and the election to 14 to 21 days, down from today’s median of 38 days. (See chart I)  This means non-acute health care facilities — let’s just call them nursing homes for short — will have little time to campaign to persuade their employees to vote against unionization.

Here are the most important new rules, their practical results, and what astute nursing home administrators are doing to avoid union elections entirely:

Administrators must give the NLRB the names, job titles, shifts, phone numbers, home and email addresses of workers within two days of notification of a union organizing petition.

Since most elections occur in smaller entities — the median size of voting units in elections is now about 25 employees — administrators faces a difficult set of additional tasks.

The first requires a small home’s “human resource department,” — sometimes a budget-starved unit that focuses on little more than doing the weekly payrolls and employee work schedules — to scramble to put together the required list: names, job titles, pay rates, shifts, addresses, phone numbers and email addresses. Personnel files sometimes do not contain accurate home addresses because workers frequently forget to report their new ones. Of course, failure to give the NLRB an accurate list of addresses can turn into an Unfair Labor Charge.

This early list gives organizers more time to contact more employees, make home visits and email them to further their unionizing efforts. As of this writing, it is unclear whether the NLRB wants workers’ home or work email addresses. If the latter, that raises new issues due to the NLRB’s new efforts to restrict nursing homes from policing what those staffers having access to email will say on the internal email systems — or even externally on Facebook, Twitter and similar social media sites.

The second task for an administrator to do is file with the local NLRB office a complete statement of position within seven days of the filing of a petition.

Since the administrator of an independent home often wears multiple hats, has no internal resources with labor law expertise and doesn’t know what a “statement of position” is, he often phones the attorney who handles the facility’s day-in, day-out legal matters.

The attorney may very well have little experience in labor matters. So he calls back, telling the administrator he needs a labor lawyer. Finding an experienced one can take another day or two. Then, they meet to discuss the nursing home’s situation, asking each other why staffers might want a union, to brainstorm what to do, and then to compose a “statement of position.” Obviously, this does not happen instantaneously, yet the NLRB’s clock is ticking.

Other nursing homes — part of regional or national chains — have labor relations specialists ready to parachute in to save the day. That’s a big help, of course, but the individual care center’s particularities — its organization structure, who reports to whom, just who is a supervisor under the law, etc. — often create unique challenges, even for experts.

Most knowledgeable labor lawyers are conservative and want to protect their nursing home clients. So they, no doubt, will file a lengthy statement raising every possible question imaginable. Making this task far more difficult is the NLRB’s 2011 Specialty Healthcare Case (357 NLRB No. 83). Under this case, so long as a union’s petitioned-for unit consists of a clearly identifiable group of employees, the NLRB will presume the unit is appropriate. The employer is then faced with the uphill task of proving that the unit should include additional staffers, by demonstrating that staffers in the bigger unit share an “overwhelming” community of interest with those in the petitioned-for unit.  Since the Specialty Healthcare standard allows the smallest units possible, healthcare facilities face the possibly of workforce fragmentation into multiple small units. For example, laundry workers, employees in dietary, CNAs, and recreational aides could be split into four separate units. Obviously, smaller units work to the union’s benefit. (SEE: “Labor Pains: Craig Becker’s Troubling Prescription for Long-Term Care Facilities”)

Knowledgeable attorneys know the Specialty Healthcare case and prepare to show that the unit the union petitioned for is inappropriate. This means additional time (a lot of midnight oil), effort and wording in the nursing home’s statement. Attorneys also know that under the NLRB’s just-issued rules, if a question or issue is not raised in the initial statement, it cannot be raised in any later proceedings. Rather than speeding elections, these multiple issues will delay them. Hearing officers will face the encyclopedic magnum opuses that attorneys will file in their efforts to protect their nursing home clients. Sorting through all of the arguments will take the NLRB’s hearing officer time and effort. If anything, this will delay elections. (SEE: “Creating A Sense of Community” from Administrative Radiology.) 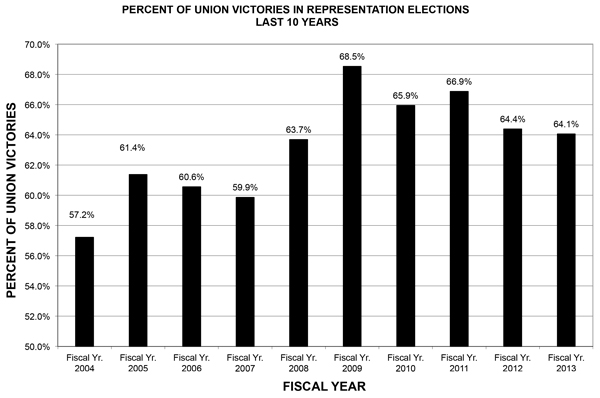 While all this is going on, the worried administrator must deal with his normal busy work — meeting staffing schedules, worrying about budgets and late reimbursements, handling resident complaints … as the NLRB’s clock ticks on.

All questions about the voting unit — who is in it and is eligible to vote — will be deferred until after the election. Ballots will be counted before those questions are answered. Only if they affect more than 20% of the employees voting will they be considered.

First, staffers often ask just who would be in the union. Would it be just CNAs, aids, or whoever, or does it include dietary and housekeeping as well? To many staffers, that is a key issue. Without knowing who their fellow union members might be, it’s like buying a pig in a poke.

Second, charge nurses and department heads are asked to help in election campaigns, making handouts and asking staffers to back their home by voting NO UNION. The nursing home risks another unfair labor practice if it asks a person to make anti-union handouts and the NLRB then rules that person is not a supervisor. Thus, nervous administrators will tend to avoid using supervisors to campaign, hobbling their efforts to win their election.

The hearing officer will be required to rule on pertinent questions immediately and set a rapid date for an election, often within 10 days to two weeks. That gives the administrator little time to campaign or give his facility’s side of the story.

Since only about 7% of private sector employees are union members, relatively few know that unions have a downside as well as an upside. There are strikes, union dues and assessments, and even union fines. Wages and benefits can go up, down or stay the same in negotiations. Strikers can be permanently replaced in economic strikes. Obviously, these topics are not at the top of union organizers’ lists when they talk employees about voting union.

Staffers have the right to know the full story when they are voting. It takes more than a week or so to tell the full story of the pluses and minuses of unions, and answer the questions workers invariably have. But with the compressed time table the NLRB now has for elections, companies will have little time to inform their workers about all of the facts before they vote.

A nursing home — no matter what level of care it provides its residents — will never lose an election that was not held. Union organizers rarely cold-call, going from door-to-door seeking likely long-term care facilities to unionize. Almost invariably, it is the staffers themselves who call the organizers because they feel the need for somebody to speak for them to administration, and for protection against perceived administrative abuses.

The best way for nursing home administrator to avoid the certain expenses and disruption of an election, and the potential cost of a union with higher wages, and restrictive work rules and costly grievances (for sure) is to treat their staffers fairly, openly and honestly so they don’t feel they need a union in the first place.

Sadly, despite their best efforts, many   administrators remain in the dark about staffers’ s sentiments until a union petition is filed. Perceptions of fair treatment by the administrators, as seen by the staffers themselves, must be monitored accurately by long-term care facilities wishing to remain union-free.  (SEE: Communication Counts,” Area Development Magazine.)

Administrators in most long-term care facilities typically rely upon subordinates to report on morale. Not surprisingly, few supervisors or department managers report the petty abuses or favoritism they themselves practice. Standing alone, one or two abusive incidents might not be important. But as they accumulate, they can impact employee attitudes severely.

Obviously, training supervisors how to listen and respond to staffer concerns is important. Many homes use “canned” training programs taken from their state’s nursing home association, or sent from headquarters, which are often in a different part of the country. Most deal with generalities, not an individual home’s specifics. Asking a knowledgeable trainer to develop training tailored to the specific problems of a specific care facility takes a little time, but the results of worth it. Then, evaluating supervisors not only on the quality of care their unit provides, but also on their “people” skills, reinforces the training.

Administrators in other homes use fast, computerized attitude surveys, often sent from the home office, to try to uncover staffers’ concerns. This doesn’t work. For example, workers may be asked to score various factors on a 1-to-10 scale. Fine. But these numeric scores do little to tell an executive administrator why employees believe as they did, nor what remedial efforts should be taken. This is especially true in homes with diverse workforces, many of whom are unfamiliar with English. (SEE: “Training Across Cultures,” Industrial Management Journal.

Only a handful of long-term care executives take the time to obtain unfiltered views of their staffers’ attitudes by having audits conducted by skilled outsiders conducting face-to-face interviews in carefully structured employee groups. Outsiders are especially effective because workers — from dishwashers in dietary to charge nurses in post-acute care — are often reluctant to speak openly to management, for fear of retribution. However, their concerns that lead to unionization cannot be handled until they are uncovered … and resolved.

Dealing with staffer concerns quickly is important. Interestingly enough, many revolve around their inability to do their jobs as well as they would like. Lack of equipment (lifting aids and slings to move impaired patients; leaky dishwashers in dietary), poor working conditions (inadequate break rooms), faulty scheduling (weekend work, double shifts) all either hurt patient care or frustrate staffers — or both.

Since staffers have many sound ideas about improving patient care, it pays to train supervisors to listen to them in a systematic way and respond. When staffers see a home’s administration cares about quality-of-care and productivity, they will too.

Finally, providing rewards — financial and otherwise — to recognize staffers for their better overall performance is a powerful tool to reinforce their loyalties. They see their interests and those of the administrator in better performance to be identical.

When these efforts are done effectively, administrators of independent homes and executives in distant home offices won’t have to worry about unions in their far-flung chains.

When are you going to start?

Woodruff Imberman, Ph.D., is president of Imberman and DeForest Inc. He can be contacted for articles cited in this blog post, or for more information about the topics within.