Preparing for a presentation is always fun for me, especially when it involves original research. In anticipation of Reimbur$ement-Con, and my session “The Unexpected Nemesis,” we took a deep dive into the relationship of the Five-Star Quality Rating System with occupancy and payer mix.

SPOILER ALERT: Regardless of where you operate, the overall Five-Star rating is positively correlated with occupancy as well as Medicare proportion of the total resident population.

This relationship has existed for some time, yet it has strengthened in recent years as the healthcare ecosystem embraces Five-Star (despite many of our ambivalent feelings about the system). The Centers for Medicare & Medicaid Services instigated this market move by incorporating the stars into alternative payment models, such as accountable care organizations and BPCI. Most Medicare Advantage plans followed by adopting Five-Star as a gating factor in their preferred networks. Even when considering traditional Medicare FFS patients, hospitals typically require a skilled nursing facility to be at least a 3-star overall as entry to their preferred referral network.

In the table below, we see that as the overall Five-Star rating increases, so does average SNF occupancy. This data is from CY 2018 through 2019. We will soon be studying the impact of COVID-19 on occupancy and this relationship. 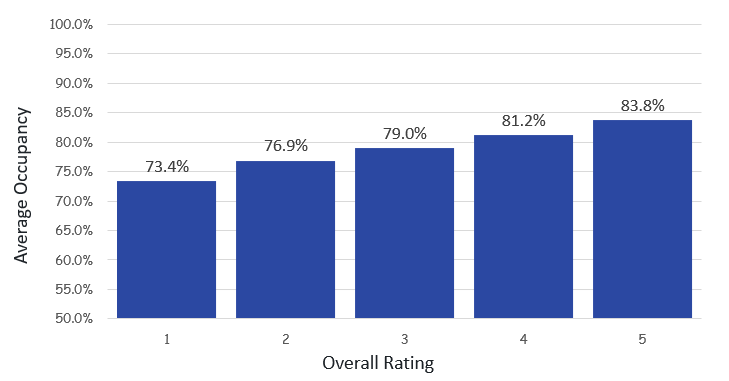 Many times operators will say, “But that doesn’t apply in rural (fill in the blank); I’m the only operator in town.” These findings are not limited to urban settings or highly competitive markets. All markets see this relationship, although its pattern varies by the market’s degree of competition.

A similar relationship exists between overall Five-Star ratings and payor mix with notable fluctuations by market competitiveness. Below we see that regardless of the market, as the Five-Star rating increases, the Medicaid proportion of the total population decreases and Medicare and “other” payors increase. While the “other” field is a bit of a mixed bag and typically includes private pay, Medicare Advantage, and a lot of noise, the relationship is worth mentioning.

Admittedly, these findings are correlational in nature and do not prove causation. That said, the relationship between the variables is supported by common sense; If you improve the delivery of care and achieve superior outcomes, you presumably do so with excellent and sufficient staff, and over time, Five-Star will fall into place, as will your reputation and occupancy. Navigating the stress of the long COVID-19 journey