I recently asked a hospital discharge planner how shechooses which nursing home to discharge to. “Five-Star” was the reply. Was Isurprised? Not at all. Once again, it demonstrates just how far this Centersfor Medicare & Medicaid Services consumer initiative reaches.

The Five-Star Quality Rating System provides a rankingfrom one star (the worst) to five stars (the best) for the nation’s nursinghomes in the areas of health inspections, staffing and quality measures. Italso gives an overall facility ranking. Since October 2010, Five-Star has beenin a “modified mode,” waiting for CMS to update the Quality Measures andStaffing domains. Yet consumers and other stakeholders continue to use it.

Concerns were raised over the fairness and usefulness ofthe system and the fact that it was not “taken down” during the transition fromMDS 2.0 to MDS 3.0. During this time, ratings have continued to be used by manyentities, such as hospitals when planning post-acute placement, MedicareAdvantage Plans to determine quality of service delivery, litigators wheninvestigating claims, and the media.

The change from MDS 2.0 to MDS 3.0 affected the qualitymeasures and staffing areas, leading to a modified system until CMS completesits updates. The Quality Measures domain had been based on outcomes from 10 MDS2.0 Quality Measures (QMs), and has essentially been frozen, retaining andusing clinical outcome measures from the third quarter of 2010.

New MDS 3.0 QMs have been developed and CMS selected 16outcome areas for use in public reporting on Nursing Home Compare (NHC). Thesenew QMs were to be posted in early 2012 but are not yet available. The NHCwebsite also states that these measures (when available) will not be used inthe Five-Star Quality Measure domain or the Overall rating calculation untillate 2012. More to come …

The second area affected by the change from MDS 2.0 toMDS 3.0 has been the staffing domain, which adjusts staff hours based uponresident acuity. Over the past 1.5 years, staffing hours obtained during thestandard survey were adjusted using resident acuity obtained from MDS 2.0 data(from the third quarter of 2010).

In April 2012, it appeared CMS began adjusting acuityusing MDS 3.0, not dated MDS 2.0 resident data.  In other words, the staffing domain is now reflective ofstaffing hours and resident case mix from the same period:  the annual survey.

But what impact has this had on Five-Star staffing?PointRight investigated.

We looked at public data for March 2012 (outdated MDSdata for acuity adjustment) and compared to April 2012 (updated data). For the13,413 facilities that did not have a new survey entered (meaning unchangedstaffing hours) it was found that 22.8% had a change in their staffing starrating. What’s more, 9.8% had a change in their overall stars ratings.

And for that Hospital discharge planner? We studied thecorrelation between 30-day rehospitalization rates to overall Five-Starranking. After appropriate case-mix adjustment to “level the playing field,”SNFs within each star are almost the same in terms of hospitalization rate.Choosing a one- or five-star facility for placement has no impact on likelyrehospitalization and is not a solid strategy. 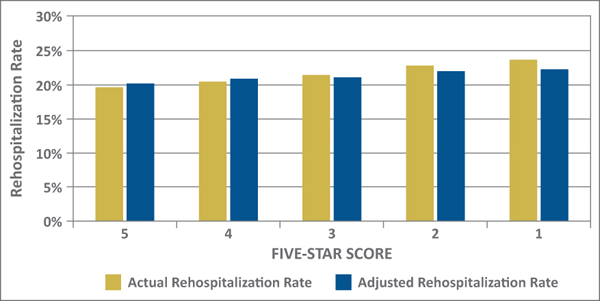 As healthcare reform initiatives such as accountable careorganizations, bundling, and pay-for-performance are implemented, it’s expectedthat this public reporting system will be integral in appraising the quality ofnursing home service delivery.

Watch for the comptroller general’s report to Congress(ACA §6107) studying CMS’s Five-Star Rating System. This analysis coveringimplementation of the system, associated implementation problems and how thesystem could be improved will be of significance to providers. Knowingfirsthand the far-reaching effects of the program, stakeholders should continueto closely monitor and provide feedback to CMS’s proposed revisions.